Vol. 4 No. 1 (2021): American Journal of Orthopedic Research and Reviews
Articles 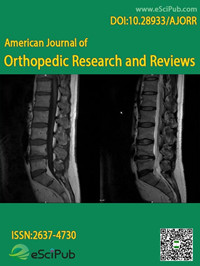 Background: It is a common notion that motion of a femoral component during cementation should be avoided as it may weaken the cement mantle. We created an in vitro model of cemented femoral components and subjected them to varying rotational motion during the cement curing process, to measure the effect on the pullout strength of the stem.

Methods: 21 sawbones femurs were separated into four groups. The first group served as control and was cemented in a standard fashion. The remainder of the stems were divided into groups and subjected to angular rotational displacement within the cement mantle during curing . Anteroposterior and lateral radiographs were obtained of each model to evaluate for cement defects. Pullout strength testing was performed.

Results: Despite rotational displacement, no cement defects were noted on imaging. The control stems showed an average pullout strength of 3735.79N. The experimental groups showed a trend for lower failure loads but it was not statistically significant (P=0.063). Of the 21 stems tested, three encountered cement mantle failure and associated stem pullout and the remainder failed by peripros-thetic fracture.