Vol. 2 No. 1 (2019): International Journal of Addiction Research and Therapy
Articles 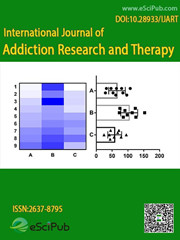 Introduction: Currently drug use is as a major problem of global public health, given the diversity of aspects involved in drug abuse, psychoactive substances exert impacts on users, families and community, contributing to damage to the physical and mental health, as well as the socio-economic vulnerability and legal problems. Objective: Analyze the degree of cocaine / crack users behavior in Cozy Communities and the Reference Center for Population Homeless (POP Center) located in Arapiraca city in Alagoas. Methodology: This is a research with a quantitative approach, performed in Cozy Communities and POP Center, which are distributed in the city of Arapiraca. The instrument used for the production of data was made by means of structured interviews conducted in the period May to July 2018, in its physical space of the institutions, listing the sociodemographic profile and Impulsiveness Scale – BIS 11. For impulsive behavior grade analysis was used to impulsiveness scale – 11 BIS, based on “Ernst Barratt model, which is considered as one of the most important in impulsive behavior explanation”. Results: The results obtained, the overall score obtained an average of 2.38 were found for each partial average score of the three subdomains impulsiveness, the resulting average motor impulsivity: 2.24 to attentional impulsivity: 2.51 and impulsivity not planning: 2.34. Conclusion: This study shows the importance of impulsivity associated with the pattern of use of psychoactive substances.