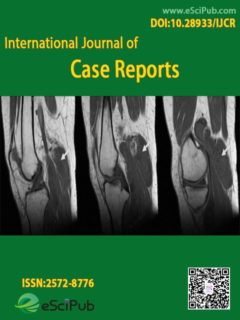 We report the case of a 69 year old female who presented with mild cognitive impairment and difficulty mobilising in the setting of profound hypothyroidism secondary to Hashimoto’s thyroiditis with associated elevated creatine kinase (CK), hyponatraemia, anaemia, renal impairment, hypercholesterolaemia and hypertryglyceridaemia.
On initial investigations the patient had a thyroid stimulating hormone (TSH) of 49 mU/L, free T4 <5.4 pmol/L, thyroid peroxidase (TPO) antibody positive, CK 1628 units/L, sodium 120 mmol/L, haemoglobin 87 g/L, creatinine 109 mcmol/L, total cholesterol 8.1 mmol/L and tryglycerides 4.7 mmol/L. On examination the patient had no features of myxoedema coma but was found to have delayed relaxation of tendon reflexes, puffy facies with loss of outer one third of eyebrows, coarse hair, brittle nails and slowing of speech and movement with obvious cold intolerance. There was no muscle weakness on examination to suggest myositis although the patient complained of generalised aches and lethargy. The patient was initially treated with 100mcg oral thyroxine daily however this was increased and oral liothyronine introduced following an inadequate improvement.
Eleven days post admission the TSH was 6.26 mU/L and the free T4 was 12.4pmol/L following a total of 1500mcg oral thyroxine replacement and 60mcg oral liothyronine replacement. The hyponatraemia improved with a strict fluid restriction of 500 millilitres daily to sodium 133 mmol/L and the renal function improved to a creatinine of 70 mcmol/L on discharge. Atorvastatin was withheld due to the elevated CK which improved to 370 units/L and the anaemia remained stable throughout the admission. Although the patient refused formal cognitive assessments her functional abilities improved with treatment. This case highlights the clinical and biochemical features of severe hypothyroidism in the setting of undiagnosed Hashimoto’s thyroiditis.