Vol. 3 No. 2 (2020): Open Journal of Gastroenterology and Hepatology
Research Articles 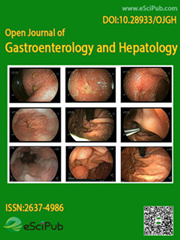 We present Mr M.A. a 27 year old Nigerian of the Yoruba tribe who has been having recurrent dyspeptic symptoms for 5 years but not previously endoscopically evaluated for peptic ulcer disease who now presented with six days history of abdominal pain which was initially epigastric but later became generalized associated with four episodes of vomiting and a day history of abdominal distension and fever. He was acutely ill-looking and dehydrated. The Abdomen was moderately distended, does not move with respiration, generalized tenderness with guarding and rebound tenderness, intra-abdominal organs were difficult to palpate due to the guarding. Bowel sound was absent. Examination of the other systems was not remarkable. A provisional diagnosis of Generalized peritonitis likely secondary to perforated peptic ulcer was made. He had an emergency exploratory laparotomy under general anaesthesia. He was commenced on intravenous fluids and parenteral proton pump inhibitor(PPI) and antibiotics. Intra-op findings include 2 liters of bilious peritoneal fluid, Multiple fibrous adhesions, a 2.5cm x 2cm gastric perforation at the anterior wall of the antrum and a grossly normal bowel. The surgical operation performed was a Graham Omental patch closure of the gastric defect with Bilateral Truncal Vagotomy and Peritoneal lavage. Post-operative state was satisfactory and he was later discharged. He presented at the gastroenterology out-patient clinic eight months later with complaints of early satiety, feeling of indigestion and episodes of vomiting. Vomitus is usually offensive / foul smelling and contains undigested or partially digested stale food substances. Abdominal examination revealed a positive succussion splash. Other clinical examination findings were not remarkable. A Provisional Diagnosis of suspected Gastric outlet obstruction probably secondary to a chronic duodenal ulcer was made. Endoscopy findings revealed copious fluid and food debris in the stomach cavity which had an offensive smell with remnants of partially digested stale food substances seen. There was poor peristaltic activity and the stomach was poorly distensible. There were multiple areas of mucosa erosions seen in the gastric cardia and corpus. No corporal or antral lesion seen. The pyloric ring was normal and the duodenum was normal. Diagnosis- (1) Endoscopic features of Gastroparesis likely secondary to previous Bilateral Truncal Vagotomy. No evidence of mechanical obstruction of the Gastric outlet. (2) Gastric Cardia and Corporal mucosa lesions likely secondary to Stasis Gastritis. Histology of biopsy specimens showed acute on chronic non-specific gastritis and acute duodenitis. He was commenced on empirical first line Helicobacter pylori eradication triple therapy (PPI, Amoxycillin and Clarithromycin) and a prokinetic drug (Domperidone). He had made significant clinical improvement with resolution of the symptoms by the time he was seen in the clinic three weeks later. He was tolerating oral food intake adequately and he had no new complaints. He was counselled on dietary modification and placed on long term prokinetic agent (Domperidone) and long-term PPI therapy with regular clinic follow-up. The initial management of post-vagotomy gastroparesis should be conservative as many symptoms resolve with time, this occurs possibly because the enteric nervous system is able to adapt to the loss of vagal input. Modification of dietary habits, such as regular intake of small meals, and use of prokinetic drugs bring about symptomatic relief in most patients.